Skirt Steak + Asparagus = Low Cal and Delish Dish for One!

As I posted a little while ago, I’ve really started to get into not only eating – but the cooking as well. (I’m still waiting on someone to clean up after me. I really am a tornado in the kitchen! My cats stay far away!). I’m also still working hard to try and lose weight by counting calories, adding in daily workouts and trying to get in at least 10,000 steps a day. As you can imagine, the eating piece doesn’t always match up with the dieting piece – but I’ve found it’s much easier to do when cooking for myself. Also, it doesn’t hurt that I got some new purple pots and pans, which make it fun to cook! (more on that later…)

I have two favorite places to find recipes – AllRecipes.com (I have an app on my iPhone), and my newest favorite is EatingWell magazine. All Recipes list the nutritional values for most of the recipes, and I’ve been able to tweak and modify to make them a little healthier (and translate the recipes to make them for one instead of 6, 10, 12, 500, etc.) But in EatingWell, everything is healthy, so all I need to do is a little math! (Finally a use for all those classes I took in high school). 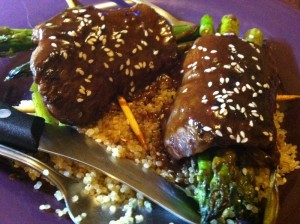 Tonight, I made Beef & Asparagus Negimaki Rolls (original recipe in EatingWell.) It was very easy, full of flavor, and as far as I’m concerned, better than any Negimaki roll I’ve had in a Japanese restaurant. And the best part? It’s only 300 calories! The original recipe makes enough for four people, calls for a bunch of scallions in addition to the asparagus and is supposed to be cooked on the grill; however, I’m just me,  I’m not a huge fan of scallions, and I live in a tiny apartment where a grill is not an option. So, in the adapted recipe below, I edited the ingredients down for 1 person, removed the scallions and added instructions for cooking in a cast iron or oven-safe skillet. I highly recommend this – so try it and enjoy!

Ingredients for the sauce (note – these are the same amounts for the full recipe for four. I reserved the leftover sauce to use as a marinade for something else later)

Remaining Ingredients (these amounts are cut  for just one person)

I served this atop a bed of steamed quinoa that I bought pre-made from Fresh Direct, and the whole meal was 550 calories, 15 grams of fat and DELICIOUS!

This entry was posted in Uncategorized. Bookmark the permalink.