I could hardly sleep last night. It was just like the night before the first day of school, only instead of worrying about if my teachers and classmates would like me, my dreams and thoughts were alive with the anticipation of my impending trip to Italy. After a delightful flight on Continental to Frankfurt, where I decided to watch the free movies on my individual TV screen rather than grab a few winks, and a short jaunt from Frankfurt to Florence on Lufthansa – 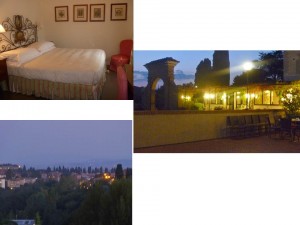 I made it to Italy. And the anticipation was 100% justified. From the rolling hills speckled with grape vines, villas and castles, to the crystal blue, cloudless sky, Tuscany is every bit as amazing as it seems in the movies.

I’m staying at the Hotel Garden in Siena. It’s a quaint boutique hotel with sweeping views of the city, a gorgeous, romantic terrace restaurant and a spacious country-style bedroom. The staff is exceptionally welcoming, and you immediately feel right at home.

After a nap to get rid of my jet lag, I, along with several other food, wine and travel writers, was treated to an amazing dinner at Enoteca Italiana thanks to the Consorzio Della Denominzione San Gimignano and the Chianti Colli Senesi Consorzio where we sampled traditional Tuscan cuisine and a sampling of Chianti Colli Senesi and Vernaccia di San Gimignano wines (more about these regions/wines tomorrow!). The Enoteca Italiana is an institution in Italy that was founding in 1960 with the main goal to promote great Italian wines and wineries.

The meal began with an artfully plated zucchini flower stuffed with ricotta and pecorinno cheese, the combination of which was both sweet and savory and played off of the earthy, green white wines. 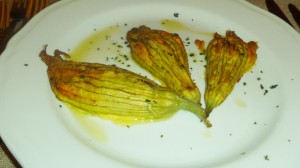 The next course was a delicious homemade Pici pasta mixed with a light tomato, mushroom and beef ragu. Pici pasta is like a fat spaghetti that originates in Siena. The rich, bold meat sauce and the dense, slightly chewy pasta is exactly what I’ve been waiting for! 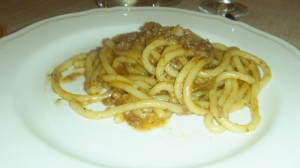 The entree course was another speciality of Siena, the irresistible Cinta Senese (pork). Smothered in a savory brown sauce, resembling an au jus of sorts, the pork was tender, salty, juicy and luscious. It also came with a piece of the crispy skin and a baked cheesy potato tart that melted in your mouth. 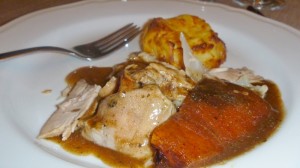 To end this decadent meal, they served a light apple tart with a lemony, custard-eque sauce. It paired beautifully with the dessert wine traditional to Tuscany, Vin Santo (holy wine). 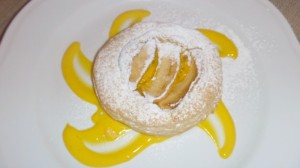 This entry was posted in Uncategorized. Bookmark the permalink.

3 Responses to Tastings in Tuscany: Siena