But where’s the cotton candy?

Today began with a joyful noise (to steal a phrase that one of my best friends, Everett, said earlier). The schola sang at First Vows here in Syracuse, and it was a blessed event.

A few hours later, I was sitting in the “golden carriage” (aka, our rented minivan), barely able to contain my anticipation, on the way to a magical land filled with endless bottles of spirits, wine and beer: Liquor Square.

Much like the milkshakes at Rocoes, I’ve been hearing about Liquor Square for months, and it definitely lived up to the stories. Somehow, we made it out of the store without buying everything in our path – though we did fill several carts! 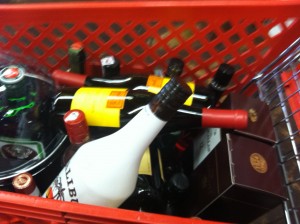 After a quick dip in the pool, a soak in the hot tub, and a few hours of rehearsal, the group headed to Grimaldis Luna Park for an Italian feast. When I say feast, in no way, shape or form am I exaggerating. There was literally enough food among the 14 of us to feed a small village. 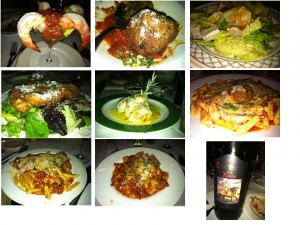 We started with fried meatballs, calamari, artichoke hearts and shrimp cocktail. That was more than enough to fill me up, but I still had a salad and the special of the night, baked cavetalli to deal with. Around the table, there was veal parmigiana, veal milanese, stuffed flounder, rigatoni bolognese, eggplant parmiagiana, and more.

We stuffed ourselves to the brim. So much so, that we all forgot about the cotton candy – which is another one of those infamous items I have been hearing about! Oh well… next year!

Then, it was finally time to sample our Liquor Square wares. My room was the designated party room, and since I was sworn to secrecy by a pinky swear, I can’t say anything more than we laughed so hard we cried. Now, I can only hope the 6+ hour trip home tomorrow is as easy as the way up!