Bar Centrale has good reason to be pretentious

After months and months, and one rejection after another, I was finally able to get a reservation at Bar Centrale – the infamous speakeasy known for its Broadway crowd and the occasional celebrity sighting. But it was worth the wait. Let me give you some background… it and you can always get a table, mind you… hidden in an only the cool people in New York can actually get in kind of way). It is on 46th Street and 8th ave right by Joe Allen. You walk up the stairs to what looks like someone’s apartment building,  cross your fingers, and hope you’re in the right place. When you get in the door, you walk through a velvet curtain (the stereotypical velvet rope would be too obvious) and you are  greeted by a beautiful, chic hostess who asks, “Do you have a reservation?” When you say no, you get the snide, almost disgusted sneer and the response, “I’m sorry but we’re completely booked,” even though it is COMPLETELY EMPTY! You walk back down the stairs feeling utterly dejected, slighted and ultimately furious that they would kick you out of an empty restaurant.

Secretly, you know you’re missing out on something. So you try again… and again… and again with the same result. At some point you suck it up and try to make a reservation. Only, when you call the same snide, almost disgusted hostess on the answering machine chides you, and lets you know that they open at 5, and do not take reservations before then, and do not take messages over the phone, or at all.

So, back to the present. After going through this entire process, I finally got someone on the phone and asked for a reservation for two after Million Dollar Quartet. You could hear the person on the phone shake her head before replying, “I’m so sorry, but we’re completely booked. With the Tony’s right around the corner, it’s just so busy.” I put on my best Midwestern charm (yep… I’m from Columbus, OH), and told her my whole story of trying and trying and trying and never being able to get in. And somehow, someway, someone was looking out for me, and she said, “Ok, I can give you a tiny cocktail table.” YES! I finally did it! I am getting in! I thanked her profusely, and immediately called my friend to let her know the good news. And then I waited patiently for Saturday night to come around.

Before the show, we went to Elsewhere. It was a fabulous meal, and I made a grand exit by knocking over, and shattering a glass with my larger-than-I’d-like-it-to-be-but-secretly-happy-it-has-some-meat-on-it ass. But that’s for another post (Elsewhere… not my derrier).

After Million Dollar Quartet my friend and I joked the whole time that they were going to say our reservation was revoked, or that they didn’t have our name, or one of a million other reasons to reject us again. But no – we walked up those stairs, straight into the entrance and I said, “Hi, it’s Traci and we have a reservation for 2.”  Then I held my breath…. the hostess (who I think is also the owner) smiled and said, “Yes, we’ve been waiting for you. Your table is right this way.” 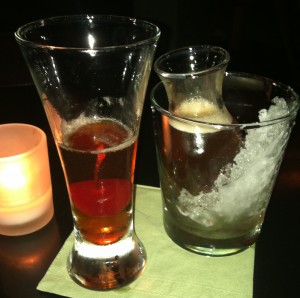 WOOOO! We were in! Success! But again, the place was COMPLETELY empty! We sat down, looked around, studied the short menu and then ordered. I got a Manhattan (they’re known for their classic cocktails). We also ordered the guacamole (the chicken live pate, shrimp cocktail, and flatbread pizza also sounded delicous). The Manhattans were amazing.  They are served in a skinny glass, almost like a flower vase, with the remainder in a small container set on ice to keep it cold.

Then, my friend got that quizzacal look, and whispered, “I think that’s Tyne Daly.” And it was! She was leaving, and walked right by our table.

Woo! Another success! We had a cele

brity sighting too. Then we giggled, and laughed and joked about all the other celebrities we’d like to see walk through the door – those that were possible given the fact that they are on

Broadway…Edie Falco, Ben Stiller, Jim Belushi, Daniel Radcliffe, Bobby Cannavale… and those that we really just wanted to see, Matthew Bomer. And who walks in the door? CHRIS ROCK! And then, Edie Falco walked in with braided pigtails….and then Ben Stiller… Ben stopped right at our table, saw Chris Rock and said, “Hey, Rock!”

The whole time, I was whispering to my friend who was walking in… she didn’t believe me when I said Ben Stiller until she saw him standing in front of our table… sheesh… From there, several TV stars walked in, Sarah Paulson (who I remember from Studio 60), Carla Gugino (who I know from Entourage and Californication), Elisabeth Moss and Bryan Batt from Mad Men!

I never thought I would see that many celebrities all in one place. Plus, the service was great (once you actually get in the door, with reservations!). The whole experience was one of the best nights I’ve ever had in New York. And now I know why it’s next to impossible to get into Bar Centrale. Persistance pays off, and I can’t wait to go again! I can only hope that every night there is like Saturday night.

6 Responses to Bar Centrale has good reason to be pretentious